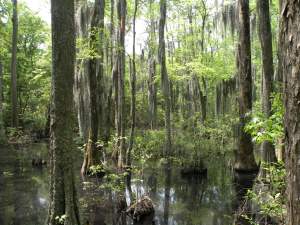 In my childhood this park was known as Seashore State Park. It is now known as First Landing State Park as per the Park Ranger, “There are several Seashore Parks up and down the east coast so we changed the name. Also the new name commemorates the 1607 landing at Cape Henry of the settlers that eventually moved west and formed Jamestown which was the first permanent English settlement in North America.” 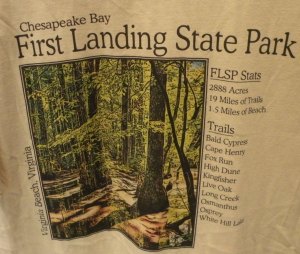 I say there are two sides to this park, the beach side and the cypress side. Let’s take a walk on the cypress side first. This is a magical world that for me really confirms that God has a very vivid imagination. The topography changes are so vast and great that you feel like you stepped into another planet. There is the cypress swamp, a salt marsh, dunes, freshwater wetlands, maritime forest and the Chesapeake Bay beach all in a short distance from each other. A topographical buffet for sure!

Sounds quickly change from birds chirping to an occasional scampering of some critter. In our short three hour visit we saw; turtles, lizards, numerous birds, and my favorite an opossum.

The opossum was a rare sighting indeed as I had never seen one in the wild. Fascinating Fact: The Virginia Opossum was the first opossum written about in 1610 – and here I see one in the First Landing Park from 1607, the park not the opossum! You just have to keep your eyes peeled in this unusual habitat as you never know what you might find.  There are dragon-flies a plenty and depending on the time of year some mosquitoes, so be prepared with some bug spray.

y has murky water in which the Bald Cypress grows. The Bald Cypress is also unique in that the trees have these “knees” that protrude from the water. They are part of the root system to give stability and provide oxygen for the tree. These “knees” are a great place to spot dragon-flies and turtles.

My favorite trail at First Landing Park is the Bald Cypress. This trail is really a long board-walk through the swamp. There are times when you are on dirt around the swamp but I really like walking the board-walk through the swamp. It is truly a multisensory experience. You can smell the air is humid and clean as the trees make for a natural air filter. The sights and sounds abound too numerous to detail. The sandy soil is easy to walk on, there are steps in some places but there are some areas of the swamp specifically handicapped accessible as well.

Now you literally cross the street into the campground beach section of the park. Admission to the park is $4 weekday and $5 weekends per car and includes both sides of the park.  On the beach side there is a boardwalk to the beach over the dunes. There is a mile and a half beach on the Chesapeake Bay side of the park. There are no lifeguards and swimming is at your own risk.

There are numerous trails in the park for hiking and some for biking too! There is a 6 mile bike trail but most of the trails are for hiking. I was there

before Memorial Day, the traditional opening beach season, so the beach is not crowed in my photos. Come summer there will be many campers enjoying the beach. Camping is available at the park and they have all the necessary amenities for  campers and tents. I spent many a childhood family vacation in this campground. I have continued to come back and visit this “Jan’s First Natural Wonder of Virginia” – albeit my personal declaration and endorsement. I hope you will take the opportunity to visit the area for yourself and enjoy!