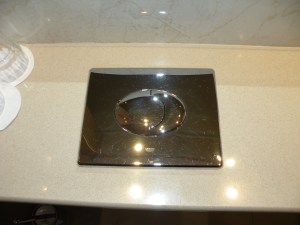 To left – is the double button.
Everyone has to use the bathroom at some point in their travels. It is always a bit of an adventure in foreign countries. Every time I leave the US I find something to marvel about in the bathroom. Ireland did not let me down!
I have found that when I enter a bathroom in a foreign country there are two things I have to take note of. First where is the necessary paper – sometimes it is behind you, under the sink, hidden in a cubby, or just hanging on the wall. 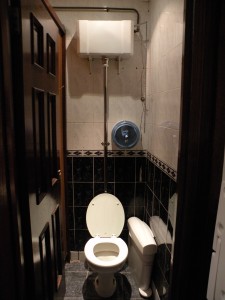 Second is to figure out where the flushing mechanism is. This means you have to look high and low.  (To left – note the paper behind you and the high tank flush.) Sometimes, it is a pedal on the floor, or a button on top of the tank, levers on the front or sides of the tank, pull chains from the ceiling if the tank is high or any manner of other hidden combinations. I have been in some countries that do not flush as continuous flow of water over a trough type contraption. The Irish do provide the necessary paper in the bathroom. I have been in places in Europe where you had to pay for the paper or carry your own. The Irish have two buttons on top of many of their toilets. One button gives you a small flush and the other delivers a full flush to meet your individual needs and conserve water.

In Ireland you do need to carry your own facecloth, washcloth, as very few hotels provided them. During my stay in four hotels, all of which were four and five star hotels, only one had facecloths. I usually buy some cheap white facecloths that I can leave behind when traveling.
As a nurse I am always concerned about hand washing, it is scientifically proven to be the best method to prevention of infection. In Ireland I was impressed with the cleanliness of the bathrooms, availability of soap and individual paper towels to perform proper hand washing. Occasionally, there would be one of those electric hand dryers similar to what we have here, but
the majority of places had individual paper towels. I did see one or two of those old rolls of real towels where you pull out some fresh towel and then it retracts back into the machine. I have not seen them in use in the US for years.
All in all, Ireland gets an A for adventure in the uniqueness of some of their bathroom. To get an A one must be clean first and have something I have not seen before, the double button was the new thing for me!