I’ve always loved music…but unfortunately I am pretty much a tone-deaf singer, so I confine myself to the old fall back of shower singing.

However when it comes to writing, I find music really soothes the savage authorial beast and helps me get my word count.

Recently I was lucky enough to attend the Smoky Writers Retreat in the Smoky Mountains of Tennessee, and pretty much every author there put on their headphones and listened to music as they wrote. So I know I am not the only one that this works for.

For me, the trick to it, is of course finding the right kind of music to fit with your project. The wrong one—and I have found this a few times—can actually hinder your writing. So when I am starting out on a new writing project I assemble a playlist of songs that fit the theme and the mood of what I am doing. 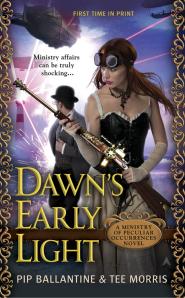 I have pretty eclectic musical tastes, so I have a lot of tracks to choose from—however there is one kind of music I find works best.

Sometimes I think lyrics can distract me from finding my own words. Additionally I am worried that the musician’s words will creep into my project. That would probably have all sorts of copyright implications, so I prefer to avoid it.

Soundtracks are used in movies to create a feeling, a tension, a stirring of romance, a pounding rhythm for a chase. So they are really the natural choice while writing.

For my fantasy writing, such as the Books of the Order series, I listen to music like the soundtracks to the Game of Thrones, or Pillars of the Earth series.

For any sort of action sequence, which happen pretty regularly in fantasy and steampunk, I love the Pacific Rim soundtrack, and for any moody, tension filled music I adore the soundtrack to the series Luther.

For the steampunk Ministry of Peculiar Occurrences, I listen to the music from the Great Train Robbery or from a series called the Virgin Queen. My husband and I write the series together, and so far it includes, anthologies, short stories, free podcasts, a roleplaying game (launching soon) and three novels. It’s a big world, and it was the first one where we wanted to have a soundtrack of its own.

We were also lucky enough to have Alex White, a good friend and talented musician, create our very own theme music for the Ministry, which we use in our short story podcast set in the world. I have to say, as far as music goes, nothing can quite compare to writing a novel set to its own, original soundtrack.

You can see what the music inspired when book three in the series Dawn’s Early Light, comes out on March 25th.

Thanks to Jan for hosting it on her site. Don’t forget to check out Write by the Rails, which is full of a diverse range of amazing writers. You can find out more about the Ministry of Peculiar Occurrences at our site, and me here.