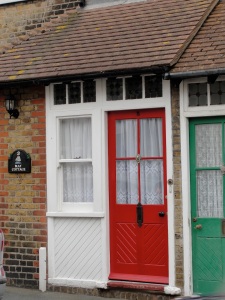 The train tried to rock me to sleep but I resisted.  We had started the day in Bunratty, County Clare, Ireland, and were now on our to Broadstairs, England, a place I knew of only from my mother’s stories and a faded, red, fifty-eight-year-old tour book.  Too excited to doze, I watched as the green fields of Kent came into sight.

My husband, Clay, and I had been hiking in Ireland for ten days that fall of 2010 and added this side trip in memory of my mother who had died the year before. In 1952, she had come to England, toddler son in tow, on a military transport plane full of other dependents, to join my father.  He was stationed at an air base near Broadstairs a small town that hugged the chalk cliffs of the southeast coast. I was born near there the following year. Growing up, I remember my mom talking about her experiences, the anecdotes always ending with the fact that on a clear day she could see across the English Channel to France.  That made quite an impression on her. What an adventure it must have been – this place a world away from the Mississippi farm where she grew up.

Once the train pulled into Broadstairs, Clay and I took a cab to the Royal Albion, a hotel that had been advertised on the pages of the old tour book I had looked through so many times growing up.  The quaint building had kept vigil over Viking Bay since 1776 and had housed the likes of Charles Dickens who often stayed there on extended writing trips.  Oscar Wilde checked in occasionally.  The North Foreland lighthouse, easily seen from the hotel, is thought to have been the inspiration for the title of Wilkie Collins’ famous detective novel, “The Woman in White.”

After settling in we made our way down to the beach where bright, jelly bean-colored cabanas had been buttoned up for the season.  Like the waves coming onto the sand, I felt emotion wash over me as I thought about my mom.  I could see why the place had captivated her.  I turned slowly, taking in the scene.  I wanted to absorb everything about the place at that moment—the charming old hotels that sat like sentinels at the top of the cliffs, the blue and white rowboats that rested against the boathouse, and of course, the view across the Channel.

The next morning after a full English breakfast to fuel our exploits, Clay and I headed for number three Shutler Road, my first home.  We left the Royal Albion, and headed down Promenade Street to Church Square.  In the months leading up to this trip, I had looked up the address many times on Google maps, even checking the “street view.”  I think I needed to reassure myself it was a real place.  We walked a few blocks, made a few turns, and then there it was, the street sign set into a low brick wall.  It was as if I were walking into one of the scalloped-edge black and white photos in my mom’s album.  It could not have looked much different than it had so many years earlier, when she would take us out for an afternoon walk, my brother in his little wool cap and short pants and me tucked snugly into my pram.

I walked slowly up the narrow road lined with small red and brown brick attached houses, until I came to number three.  It looked just as lovely as I hoped it would – red door, white lace curtains, red geraniums in the window boxes, and a sign that read “May Cottage.”

I whispered as if my mother were listening, “I’m here Mom, finally back in Broadstairs.”

Linda S. Johnston is the author of “Hope Amid Hardship: Pioneer Voices from Kansas Territory”  http://www.lindasjohnston.com/